After I started writing this, which I’ve been working on off and on this month, the Safari To Go app disappeared from the US iTunes Store. I’ll update this review when the re-release fixes the issues involved. Some of the speed issues might be related to its apparent pre-release status. The Safari Books team alludes to this in a blog post. Until then, you can use the mobile interface to the main Safari web site.

Safari Books Online now has an free iPad app that allows you to read Effective Perl Programming quite nicely on your iPad. The output looks much nicer than the Kindle or iBooks versions, although the interface is not as nice as reading a bookmarked PDF file in a general PDF reader. The app isn’t mobile interface to the main Safari web site, but it’s not much more than that. Most of the features seem to be an interface to the main site though.

The Safari Books iPad app is new, and there are many ways that it needs to improve, but it’s a decent enough start. However, the start may be as far as it goes in the current form. The app is a disappointing because it uses PhoneGap, an HTML and JavaScript framework for cross-platform deployment. Like most frameworks, that means everyone gets the same crappy application instead of anyone getting a good one.

The app has one killer feature that makes the pain almost tolerable: you can carry around 10 books for offline reading. That leaves six free slots once you’ve loaded Effective Perl Programming, Learning Perl, Intermediate Perl, and Mastering Perl. You can change the set of books when you are connected, which has always been Safari Book’s strength: you have access to virtually the entire catalog with having to buy individual books.

It takes a while to load the books, so don’t expect to do this in an airport lounge before you run off to your flight like I thought I could do. It took me over 12 minutes to download Effective Perl Programming, while I downloaded in to another reader the full, 7.3 MB PDF file of the book in 15 seconds. 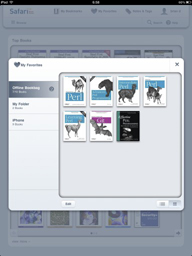 The offline bookbag that holds up to 10 books

Offline browsing doesn’t always work, so you should check that your books downloaded and configured themselves correctly before you expect to read them on those long flights. The search feature also disappears in the offline mode.

One of the most important features of a technical book is its layout and typography. Most programmers are quite particular about their choice of font and spacing, let alone style. A bad layout in the book can destroy otherwise good content. That’s not such a problem in Safari Books, and somewhat better in the iPad. Once you have the books, you have to two ways to view them. There’s a “Print” and an “HTML” view. 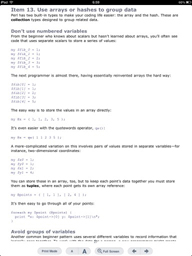 The HTML view of Item 13

The HTML view is just like the Safari Online web site HTML version, each of which have a full screen view that hides the toolbars and controls. If you are used to reading the HTML version of the books in the main Safari Books site, you’ll be used to the same thing here. The book is broken by section (or some other sub-chapter division) in the same way. If the content is longer than the display window, you can scroll by swiping. The HTML view is not available in offline mode.

The “Print” version looks almost just like the corresponding page in the physical book, although with a faint, personalized watermark. It’s more than just Safari Books rendering the book according to a style sheet, I think. 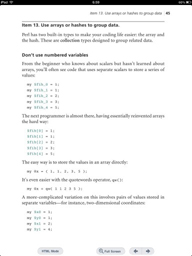 The print view of Item 13

Changing pages in either version is a pain, both in interface and speed. As before, the app is missing the swipe gesture that most of the other reader apps use. The page loading speed may be comfortable for Kindle people accustomed to the virtual ink display, but iPad users will wonder if they should perhaps check their email while they wait. It looks like the “print” page is being rendered fresh sometimes, and it tends to get better. Pages I’ve already looked at recently load more quickly, but still not that fast. It’s not that the iPad is slow: reading the Effective Perl Programming PDF file in GoodReader has no lag and uses swipes to change pages that have no load time.

As a writer and publisher, I’d prefer that everyone has a PDF version, but until sellers start charging reasonable prices (say, $4.99 or less), Safari Books is still a good deal and this is a decent start for an iPad interface. That you can carry 10 books for offline reading is a great feature, even if you have limited features during offline mode. If you already have the PDF file, skip the Safari Books app.